On successfully enabling STING on Qualcomm Dragonboard 410C board, the quality of test stimulus generated by STING was evaluated by profiling the performance monitoring events available in the CPU implementation. As part of this exercise, few open source benchmarks were also profiled for the same set of events and the results were compared with the STING tests to determine the effectiveness of test stimulus.

In this blog, all the steps involved in this activity are recorded. A small subset of the profiling results for a couple of performance monitoring events can be found towards the end of this blog.

In case of STING, the code section profiled was the stimulus generated by its constrained random test generators. The difference in the starting and ending values of the monitored performance events were accumulated over a large number of test iterations and a mean value was computed. In order to do a comparative analysis, few open source benchmarks were ported to STING’s C++-based API framework and same set of performance events were profiled for them over a duration of time.

Only the integer and floating point components of RAMspeed were used for this exercise. In order to make sure that similar traffic patterns were being compared, the tests generated by STING also consisted of load/store operations acting on linear data streams. Also, the code sections for RAMspeed and STING were of different length. Hence, the values recorded for every event were normalized for 1 million CPU cycles.

The next section consists of the profiling results of few performance monitoring events enabled on Qualcomm Dragonboard 410C for the STING tests and the RAMspeed benchmark.

The performance monitoring event values from the execution of STING tests and RAMspeed benchmark will be presented in this section. As mentioned earlier, data related to only a few events from 20 tests comprising of 1000 test iterations are given here.

The first event being presented here is on the load/store density of the instruction stream being generated. It is a combinational function of the following architectural events - loads retired, stores retired and instruction retired. Since the tests comprises of consecutive data accesses on linear memory, this event will give an indication of how tight or compact the traffic sequence is. 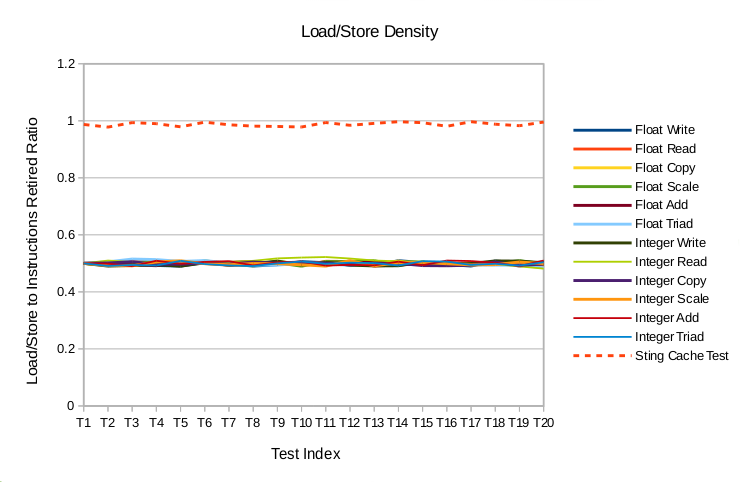 In an ideal scenario, all the instructions run are expected to be loads/stores resulting into a ratio of 1. But the instruction stream generated from the compilation of a C/C++ test (similar to RAMspeed) has lot of other supporting instructions which tends to dilute the test intent. On other hand, the STING tests generate a ratio which is very close to the ideal.

The next table presents the counts for L2 data cache access event. The counter counts memory-read or memory-write operations, that the CPU made, that access at least the level 2 data or unified cache. Each access to a cache line is counted including refills of and write-backs from the level 1 data, instruction, or unified caches. Each access to other level 2 data or unified memory structures, such as refill buffers, write buffers, and write-back buffers, is also counted.

As mentioned earlier, the counts in the table are normalized for 1 million CPU cycles. The high count from STING test can be attributed to the tight sequence of operations.

The next event is bus access. The counter increments for evey bus cycle for which the bus is active. It is clear from the diagram that the bus remains active for a longer duration during the STING tests as compared to the benchmark. 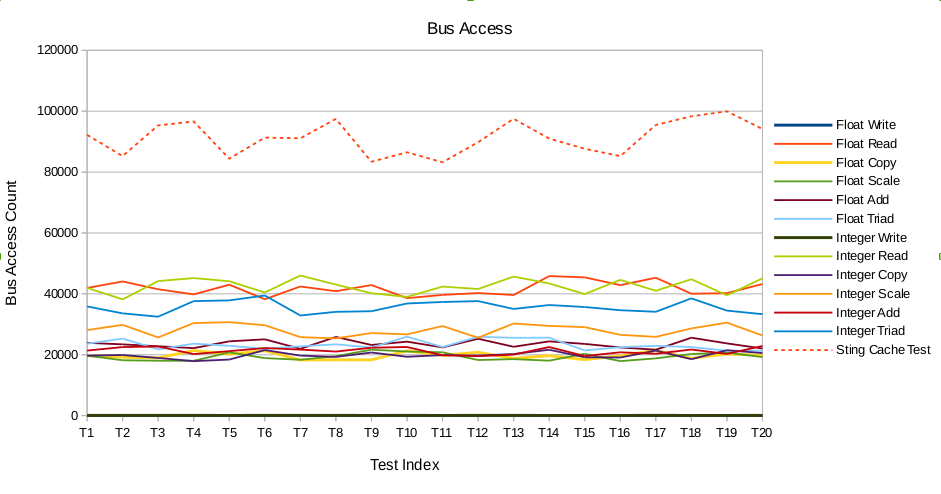 The quality of the test stimulus generated by STING can be assessed to some extent by analyzing the profiling results. It is clear that the code sequences generated by STING are very tight. As a result the intent of the test is met in shorted possible time duration. Also, the configuration parameters for biasing of tests can generate any traffic pattern making it an ideal platform for generation of functional stimulus.

Feel free to contact us if you have any questions. The detailed report on all the enabled performance monitoring events and other benchmarks can be shared with interested readers.